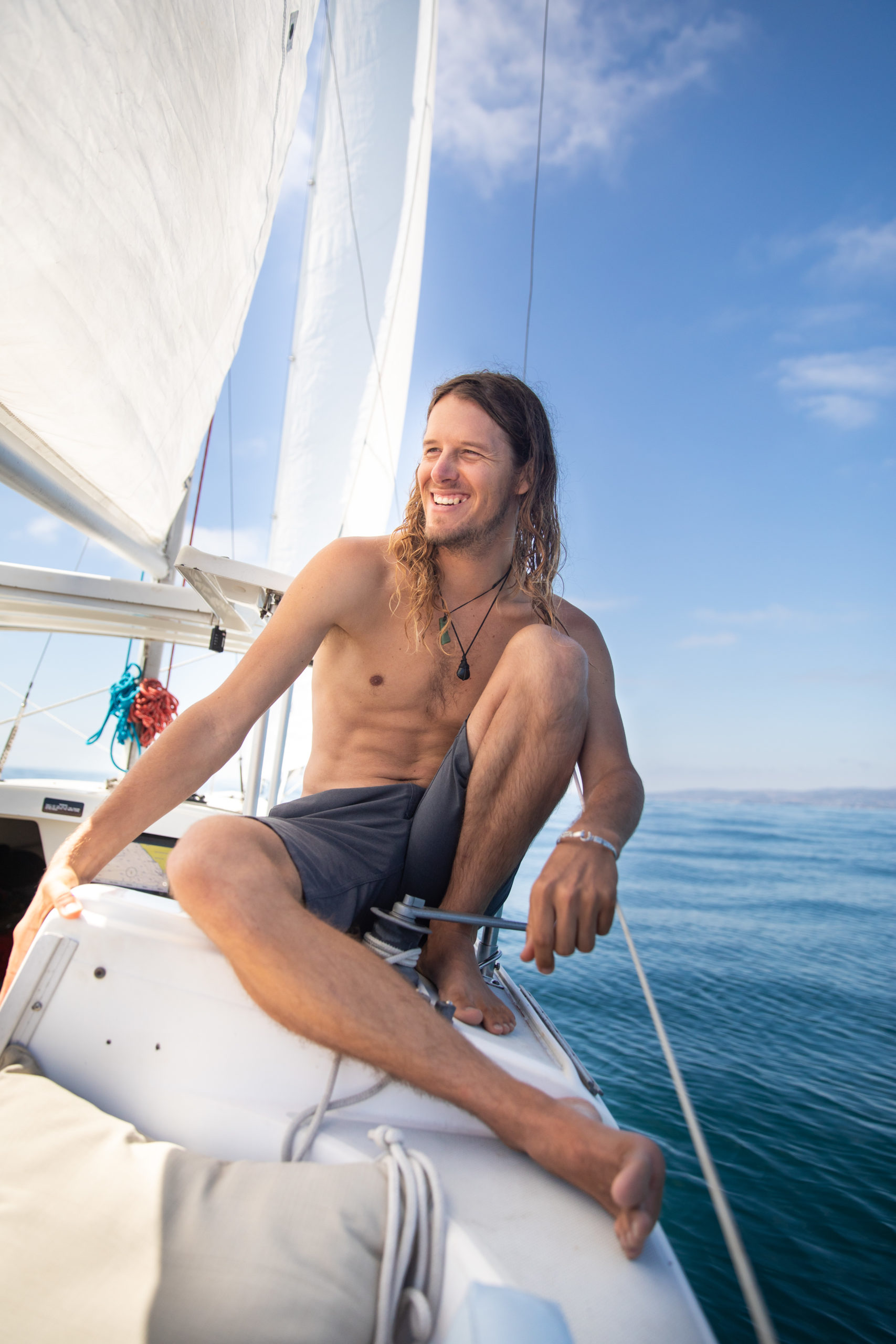 My goal is to be sitting with good friends around a driftwood bonfire on an empty stretch of coastline, with a burrito and a cerveza and an acoustic guitar, free styling songs about the places we’ve been and the people we’ve met. And I want those songs to remind others of the vibrancy of life and the depth of the moment.

Music is my ship, and she’s sailed us all over the US, Caribbean, and Hawaii. On our most recent tour of Hawaii we stepped off the plane and that same night we were already sleeping on the beach at the base of massive volcanic cliffs at Polihale, Kauai. Hotel room and TV’s are blackholes for inspiration, they’re the ani-muse.

Travis is the youngest of the two brothers and writer of songs such as Toast to the Coast, Just Take it Easy, Fool, and Settle for the Sunrise. He began recording at the same age as he began surfing—around fourteen, influenced heavily by Brian Wilson of the Beach Boys. That passion led to several bands and enough shows to pay his way through business school at Cal State University Fullerton. He was often seen going to school in shoes repaired with duct tape, carrying his books in a Ninja Turtles pillowcase tied to a stick. On a week-long backpacking trip in Kauai, which was also Travis’ bachelor party, the two brothers decided to form the band.

When he’s not playing in the band he’s leading worship on Sunday mornings, surfing, spearfishing, exploring the coast for secret coves and plotting ways to camp on the beach.

The ocean is giving away free sandals. How could anyone say no to that? We did some shows in Hawaii this summer, a local friend tipped us off about a beach where we could freedom camp on the sand, you just have to watch your stuff so the bush people don’t steal it. After a night of bonfire jamming under the stars that suddenly turned and became torrential rain and sleeping with wet towels for blankets, we hiked back from the beach and my sandal broke on the muddy trail. It was no problem, because not even 20 feet down the trail I found a new right sandal, albeit two sized too small. #hangheels

Growing up, what pulled you into a life of music?

When I was in 6th grade Nate brought home a guitar he had bought for $20. It still hangs on my living room wall today. We wrote songs about the neighborhood cats being in love, our Dad wearing a kilt, our Mom’s apple pie, and formed a band with the kids on our street called “The Sandwich Band.” Our parents would pay a dime at the door to see our shows in the spare bedroom….it seemed normal to us at the time. Then we started borrowing the family camcorder to film music videos. Fast forward to today, I have a business degree and Nate has an engineering degree and yet we still write songs and make music videos together! Life has a sense of humor.

I wouldn’t say that I live for music, but I would say that I live through music. One of the greatest things about being a musician is that it becomes your job to discover yourself, to reach for inspiration and self-clarity. You have to live more so that you have more to give—that’s true for anyone, but especially the artist or musician.

Who are your musical heroes?

The first time I heard Jack Johnson on the radio I immediately went into my parents’ garage and wrote my own ‘Jack Johnson’ song. I play a Cole Clark guitar because that’s what he plays live. He’s is an inspiration not only to play music well, but to live well.

Sublime was one of the first bands that my brother and I listened to that wasn’t our parents’ music. My mom made Nate edit all the cuss words out of his old Sublime tapes! haha! I ache to sing with the kind of passion that Bradley Nowell did.