…I pulled two drowning girls from the water.

Home/Blog/…I pulled two drowning girls from the water.
Previous Next

…I pulled two drowning girls from the water. 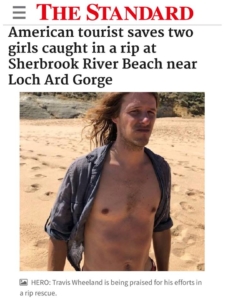 Yesterday I pulled two drowning girls from the water. I don’t know their names. It all happened fast. I was strolling over a rocky point at a hidden beach along the Great Ocean Road in Australia, when I noticed a lot of people on the beach waving their hands above their heads. Some of them seemed to be looking at me. I walked faster toward them. On the sand the young men asked me if I could swim—which I took as an odd question. They pleaded with me to help the four people in the water. I asked if there was a surfboard or any floatation device nearby. Someone fetched a red bodyboard.

There were two sets of two in the water: one was a dad and small child—they were closer to shore and seemed to be in less danger, so I chose to paddle to the two girls who were farther out. They seemed more in trouble.

It’s pretty surreal to think that they would’ve most likely drowned if I hadn’t happened to be there. In movies there are signals telling you what’s happening: the music score, the foreshadowing. But in real life there’s none of that, just a moment in realtime, unguided. I feel blessed to have been able to give such a great gift to them. I grew up swimming and surfing in Southern California, so handling the surf and the current was familiar and relatively easy for me.

When I reached the two panicking girls, one told me she had asthma and was breathing hard. It was clear she needed the bodyboard the most. She did a great job of paddling herself to shore. I pulled the other girl in by the arm, assuring her that we were OK. I talked her through each wave that broke over us. Each time we ducked under a broken wave I pushed her up toward the surface. Soon we had reached standing depth. Seeing her father laying on his back in the sand, she shouted to him and rushed from the water with renewed strength. 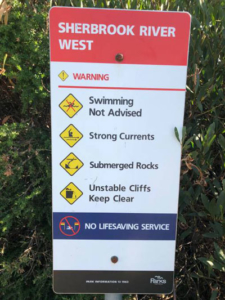 The feeling of relief had to wait until the dad began to regain himself. The police arrived and helped the father, who was still in shock. Gratitude was exchanged in repeated hugs and hand shakes. And I walked back over the point, alone, contemplating my unexpected gratitude to them for their lives. Here in this wild coastline I was reminded that being civilized isn’t about cleanliness and concrete, straight lines or complex systems, it’s about salty, sandy, strangers reaching out to one another in an unpredictable sea.

I wonder who they are and where they are now and how this memory will change them. I hope it’ll be a memory of rescue and not one of fear of the ocean. For me, it will be one of how great it feels to give something of meaning even when it’s an easy, free thing to give.